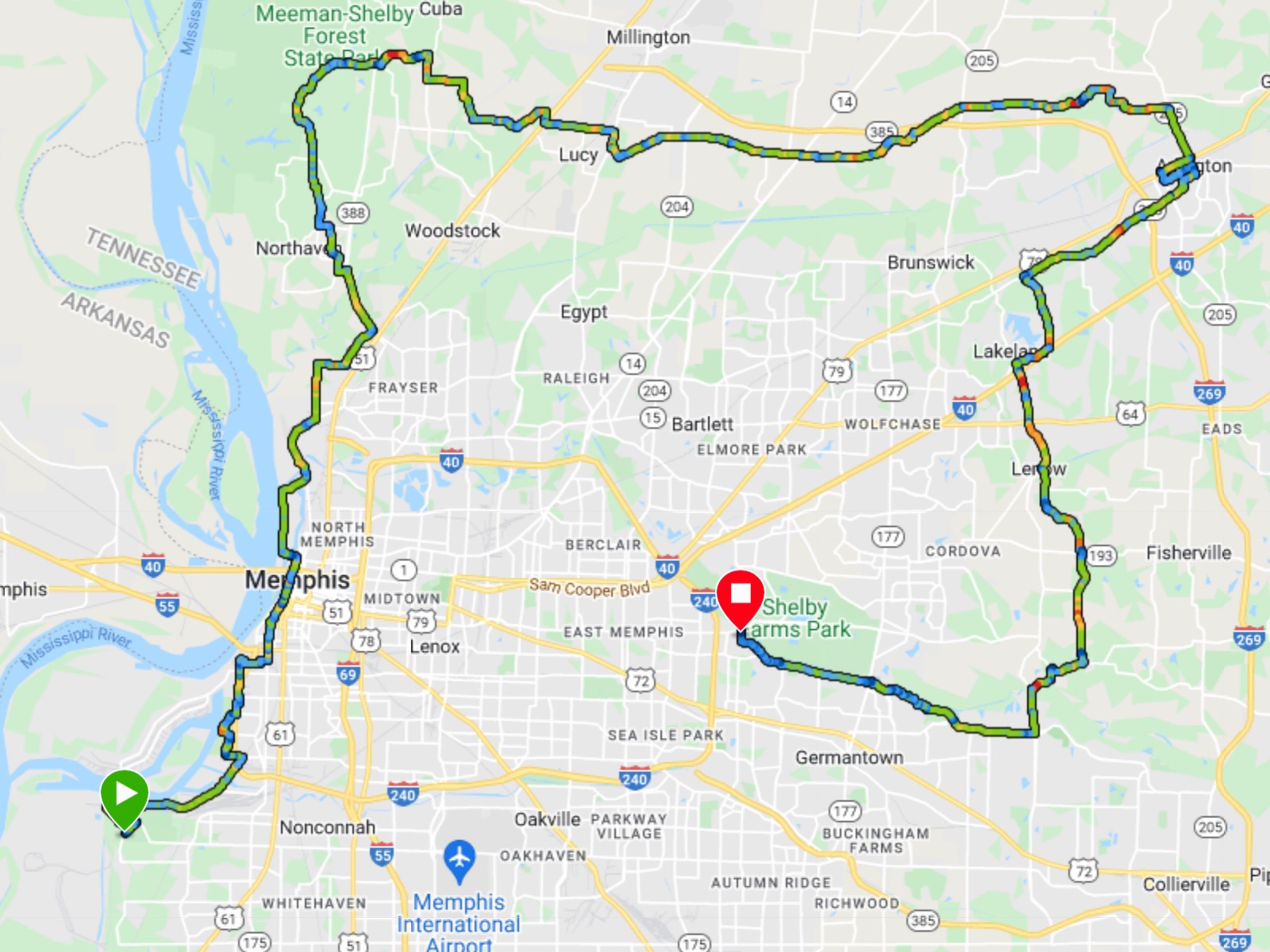 On Tuesday, May 11th, 2022, I decided it was time for an out-of-town trip. I had just completed a consultation with a sleep doctor the day before and left feeling very hopeful about fixing my lack of quality sleep.

I found a campsite where I could charge my EV then went to Walmart and bought a tent. I threw my road bike and a small selection of items into my car and departed the next morning. The original plan was a bit open-ended with the possibility of traveling all the way to Austin, TX. It was a bit of a test of a new “escape plan” I had come up with. It looked like this:

As mentioned above, visiting an excellent sleep doctor really got me excited about my life improving. As another part of that, I have decided to try and drop the 10-15 pounds that I have accumulated over the past 2 decades. I plan on doing this through increased activity and less snacking (my current diet is actually pretty good already).

So in working this into my travel escape plan, I’d like to take advantage of those hours spent waiting for my EV to charge up. The best would be if the fast charger was located very close to a Planet Fitness gym. I actually have this situation in Cincinnati with a Chevy dealer. There would be some benefit to having a Planet Fitness near a 6kW level-2 charger. This would give me up to 24 MPH, so for a long 2-hour workout, I might be able to get up to 50 miles of range. This is so unlikely and difficult to search out, that although I have tried this, it really is not worth the trouble.

I think stopping at a fast charger and then biking to a Planet Fitness might be in the cards, but still a bit problematic. So, I’ll mostly just walk while charging.

Charging non-Telsa EVs can be quite an adventure all by itself, at least near me from my experience. Electrify America has been the most reliable and they generally have lots of “dispensers” so you can pretty well depend on being able to get a charge if you can make it to a station.

How far will the Chevy Bolt go on a single charge?

I decided to try to push my Bolt for maximum miles on the initial leg of my trip. From the PlugShare map above you can see that it was indicating 219 miles. For me, that initial leg was actually 254 miles because I need to add an initial drive before I started south.

To make this distance, I knew I’d need to drive efficiently so cruised at 60 MPH down I-71.

It is quite amazing that my Bolt completed this first leg at 4.3 miles/kWH. Very remarkable and impressive.

Although I limited my speed, I did run the A/C and you can see from the picture that the cooling consumed about 5% of the energy. Also, this was a trip through hilly Kentucky so I was constantly going up and down hills. This result was beyond my expectations and I think that there must be some additional parameters that enable this great result. Perhaps I had a bit of a natural tailwind, and I obviously got a bit of benefit from all the Semis blowing past me as they were generally cruising at about 70 MPH.

To complete the story, my car had gone into the “Low Battery” warning zone. Once I plugged into the charger, the car reported to the charger that it had 5% of battery left, so I had possibly up to 10 miles of additional range if needed. Certainly, I was not planning on running it this low, and it would never be my recommendation to do so. Also, I have the recall battery replacement already done on my car so it should be a nominal 66 kWH battery, the usable capacity is not clear.

I don’t have any great pictures, but I have a plywood platform that allows me to sleep inside of my Bolt. It is not quite as roomy as by Toyota Prius, but it will do. I’m 5’11” and sleeping diagonally I have about 6’4″ of space.

One quick note on “Camper Mode” for the Chevy Bolt. Since I was plugged in and charging, I could spare the small amount of power required to run my A/C. To “trick” the Bolt into continuing to run, you need to have the car “running” and in Neutral. If you leave it in Park, it will shut off after a short while (perhaps 30 minutes).

A bit less to say about my actual bike ride part of this adventure. I had laid the route out using Garmin Connect and Google Maps but really did not have much idea of what to expect. After getting through the downtown area, which was not too difficult or troubling, I was out in the forest and maybe saw only a handful of cars and people for the first 50 miles! It was almost scary. Lots of canopy roads with decent pavement, and rolling hills.

I was trying to take on lots of water because of the heat and humidity, but clearly was not keeping up. At the end of this first segment, I was actually wondering if I was going to be able to finish the ride. The temperature had reached 95 ℉ with partial clouds and very high humidity.

I found a Wendy’s and decided to just drink, cool down, and rest. I must have looked pretty bad because one of the workers actually came over and asked me if I was okay! After almost 2 hours, 1 plain baked potato, and numerous Gatoraids, I was ready to complete the ride and was feeling fine. The end of the ride was actually very enjoyable.

One interesting note is that because I rested for so long at Wendy’s, my Garmin GPS decided that I just have finished my ride. So when I started back, it recorded it as a second ride. That second “ride” was another 23 miles to give me a daily total of 106 miles.

Drive back to Cincinnati

My open-ended plan was to continue the trip South with thoughts of even making it to Austin, TX. With the heatwave and many new experiences under my belt, I decided it was time to head back. Charging was still a bit of a pain, especially without any good charging options near Louisville. I ended up finding a 25kW charger at a Harley Davidson dealership near the University of Louisville. This gave me a chance to spread some of my sweat on their lovely campus.

All-in-all a fantastic trip! I learned a bit about my car-camping-bike-riding-escape-plan and it worked very well in this instance.