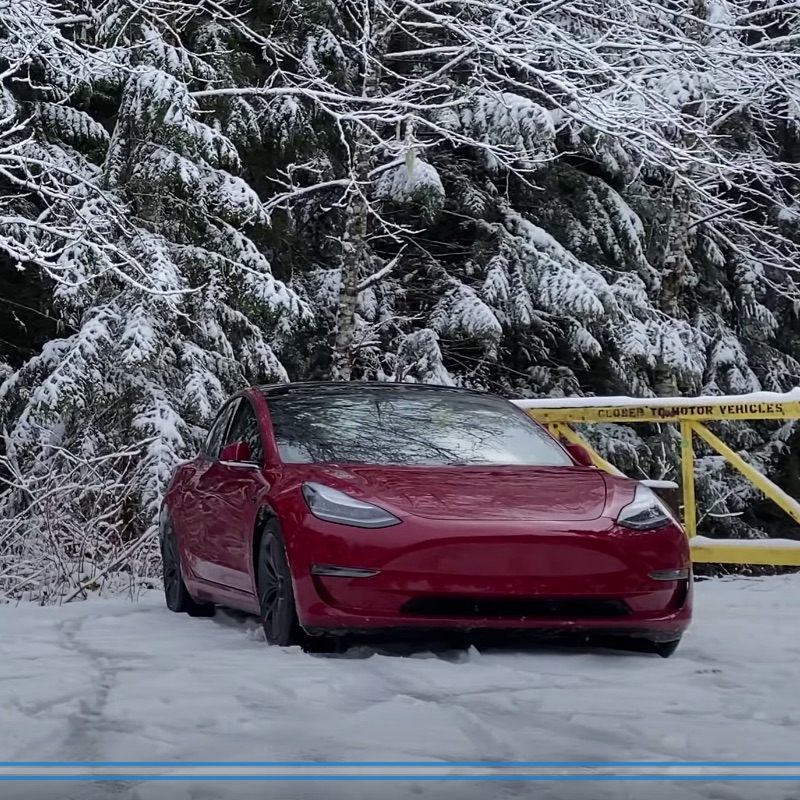 Jason Fenske, of Engineering Explained YouTube channel (and if you aren’t following him and watch any YouTube at all, what is wrong with you), posted Summer vs. Winter driving comparison data for his Tesla 2018 Model 3 Performance for a 2000 mile cross country drive. I love this type of real-world data and want to emphasize what I see as the key finding here. (But there is so much more FANTASTIC info that you should watch the whole video.)

He drove the same 2000 mile route across the US. Once in the summer(2019?) and once in the winter (2021). He is an engineer, well really he is an interesting highly articulate engineer with enormous respect and credentials, and not to mention about 3 million subscribers on YouTube.

My calculation is that for the Winter trip, the energy efficiency drop was less than 8% (and possibly closer to only 5%). As a Chevy Bolt EV owner, I’m a bit envious, and frankly, very impressed. I know how impressed I am with my Bolt, and data like this just blows me away.

Here are the numbers:

So what is this speed correction?

So, although these 3 drives were 18 months apart, and traveled pretty much the same route, he did end up using different driving/charging behavior. It seems that although the Telsa will try to minimize the number of charging stops, doing so might actually make the full trip longer. On his second trip (Winter), Jason better optimized his charging stops and made many more.

As any EV owner will tell you, their cars (including Teslas) charge much faster up to 80% after which the charging rate will slow down. And the slow down can be very dramatic, especially as the battery approaches full capacity. To to keep the fast charging speeds, it is best to not charge beyond the 80% mark unless you REALLY need it to get to the next charger. So although Jason’s driving distance between charges was about 200 miles for the Summer drive, for the Winter drive he stop much more frequently.

Another truth about EVs is that their efficiency greatly drops as speeds increase especially over 60 MPH. Jason seems to have a desired cruising speed of about 80 MPH, but dropped that to 75 MPH for his Summer trip where he was trying to drive longer distances between charges. For the Winter drive, with the more frequent stops, he had a much larger reserve distance for the travel segments and felt more comfortable with his standard 80 MPH.

From the Model efficiency data supplied to the EPA, the decrease in energy efficiency for increasing a cruising speed from 75 to 80 MPH is -8%. So once we remove that, his Net Efficiency Drop for the Winter drive calculates out to about 7.7%.

From the Model efficiency data supplied to the EPA, the decrease in energy efficiency for increasing a cruising speed from 75 to 80 MPH is -8%. So once we remove that, his Net Efficiency Drop for the Winter drive calculates out to about 7.7%.

But, actually, the efficiency drop MIGHT NOT EVEN BE THAT HIGH. You see, he also said that he preheated his car before leaving! He estimated that this took up as much as 5% of his range. Now, it would not make sense to just subtract this off, because the cabin and batteries were going to need to be heated anyway. But clearly, it would have been at least a little bit more efficient to do that while rolling down the road.

If you are at all interested, you absolutely should watch at least Jason’s second video where he compares the two trips. Links are below.

(Summer): How Miserable Is A Tesla Road Trip?

If you’d like access to all the numbers from Jason’s YouTube video, I compiled them in the following google sheet as I ponder over this. You can find it here.